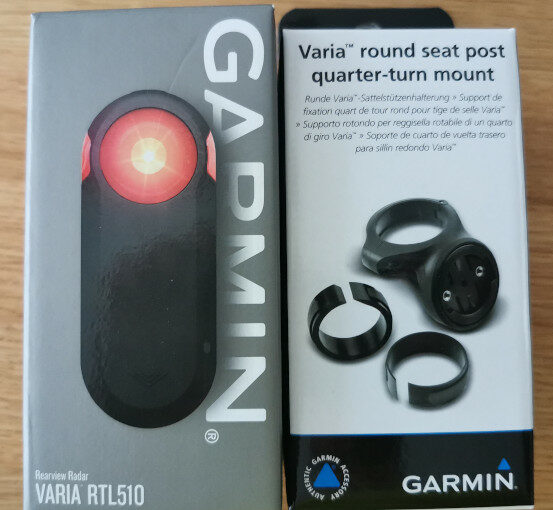 Garmin offers the rear tail light “Varia”. I ordered the latest generation RTL 510/511 and took a closer look at it.

Do you know that feeling: You are riding a nice after-work tour, the wind is blowing and all of the sudden a car is behind you without you noticing it before? That happened recently too often and could potentially be dangerous.

Garmin states that they have a solution for it: The Garmin Varia rear tail light.

What is the Garmin Varia?

The Garmin Varia combines a battery tail light with a sensors, which detects objects closing in on you. This allows your Edge bike computer or your Fenix or Forerunner watch to warn you. Plus the light will start to blink when objects are close.

The Varia is available in 2 variants with 2 different bundles each. The RTL511 is the version for the german market, the RTL510 is the international version. The german version do not blink on incoming objects as backlights are not allowed to. Also the maximum brightness have been lower. On the plus side, the battery charge lasts longer than with the international version.
Both versions are available as the device only or as bundle with a radar display unit. The radar display unit is useful if you do not have a watch or bike computer or if that device is not compatible with the Varia.

What is included in the box?

First of all the light. To attach it to your bike a mounting kit. A micro usb charging cable and the manuals.
If you bought the bundle, additionally the radard display unit.

How do you mount and set up the Varia?

The installation is very easy: The mounting kit is mounted within a minute (Place the mounting kit on your bike a fasten it with the rubber bands). The Varia comes with Garmin’s standard 1/4 turn mount like the Edge computers.
As I was not sure about the longevity of the rubber band, I bought the Garmin Seat-post Quarter Turn Mount. This allows to fasten the mount with a screw.

The Varia itself is charged via a micro usb cable. The port is located on the bottom. While charging the LED flashes. When it is fully charged, the light is solid.

To connect it to your watch or bike computer, just turn on the light and search for a new sensor in your watch/computer. That’s it!

How does the Varia work?

As the Varia offers 2 functionalities, I will present them separately:

After you have added the Varia as new senor, it will added as light automatically. Garmin calls it light network, which allows you the remotely control your light with your Edge. With the quick menu you can turn on or off you light. This comes in handy if you want to use the radar, but don’t need the light and want to save battery: Connect the Varia and turn off the light, the radar stays active.

The main light is the big red circle on the front. Additionally the Varia has 2 smaller lights on both side, so it is visible from the side. Garmin states the overall visibility is around 220°.

If you are using the RTL510 (International version), you can turn the light off, have a solid light, a day flash or a night flash. The german version is limited to on or off.

A nice feature of the RTL510: If an object is closing, the light starts to flash. This enhances the attention of the driver behind you.

When connection to a watch/bike computer, it will be added as radar automatically. You can check this with a wave symbol on your screen:

Now the sensor is connected an will react to objects behind you.

I clear say objects, as Varia scan the area behind you and alerts you when the distance is decreasing. If that is a car or bike, does not matter as the Varia cannot detect the kind of object. You can test it yourself: Roll your bike backwards to a wall. The Varia will warn you.

When the Varia detects an object, your device will starts to beep. On my edge 830 the beep is pretty loud and clearly audible even with cars and wind around you.
Simultaneously the display changes. A bar is added to your screen and one or more dots are displayed within. Each dot represents an object behind you. Additionally a red frame is shown. When the objects are getting closer, the dots will move upwards (You are on the top of the bar).
When the objects passes you, the dot disappear and the frame becomes green. When no object of behind you anymore, the bar disappears.

Garmin says the range of the radar is 140 meters. My tests show that the range is normally a bit higher. This should give you enough time to prepare accordingly.
Example:
You are riding on a country road with 30 kph and a car is behind you with 80 kph. With 140 meters range, you have from the warning until the car passes, about 10 seconds. This might not be a lot, but suffices to move to the roadside or the get behind your partner.

The detection works flawlessly. Even with bike behind me, the Varia detects cars and warns accordingly. Same applies to bike roads next to a street. The Varia will warn you if a cars is behind you.

Over the last months I did not get a false negative, this means that I never had a car behind me and didn’t get a warning. On the other side I had (very rarely) a warning but no object behind me. I still prefer to get a warning too much than to little.

Do you need the Varia? The rear tail light is good, the not that good to justify the price. So if you want to decent light, you should get something better for less money.

If you want to increase your safety, then this is your investment. If feel some much safer when riding with the Varia that I don’t want to ride without it anymore.

But it has it prices and not anybody can or want to pay it.